There are many Gordie Howe Quotes available on the internet. So I have put together a collection of the top quotes to save your valuable time. Raed a short bio of Gordie Howe before check his famous quotes.

When the name Gordie Howe is pronounced, we remember the world-class Canadian Hockey Player who has played over Twenty Six seasons and was a great performer in Canadian History.

He was born on March 31, 1928, in a large family. His family was not financially solvent and had to pass his childhood in poverty. They had to starve day after day, and Gordie suffered from many diseases. At an early age, he had even to sell their belonging to buy foods. And he found his first skates from their old possession to have a passion for Hockey.

He started to play Hockey at an early age and had to struggle to get selected in the local hockey team. Being professional labor in his early youth, he became an excellent skater and flourished as a new talent.

At the beginning age of his play, he scored thirty-five goals in the first three years. It was a legendary score in Canada. Then nothing could stop him from his shining career, even after a horrible accident. He was such a player that he became the top player in NHL, became League Leader. Later, he also played with his son in the same match. He was considered to be the best player of all time too.

His memorable playing records will soothe our mind:

Being a successful world topper Hockey player, was he the best one? He is undoubted to be the best one. Gordie Howe was one of the finest players of this time and left valuable lessons for future players. 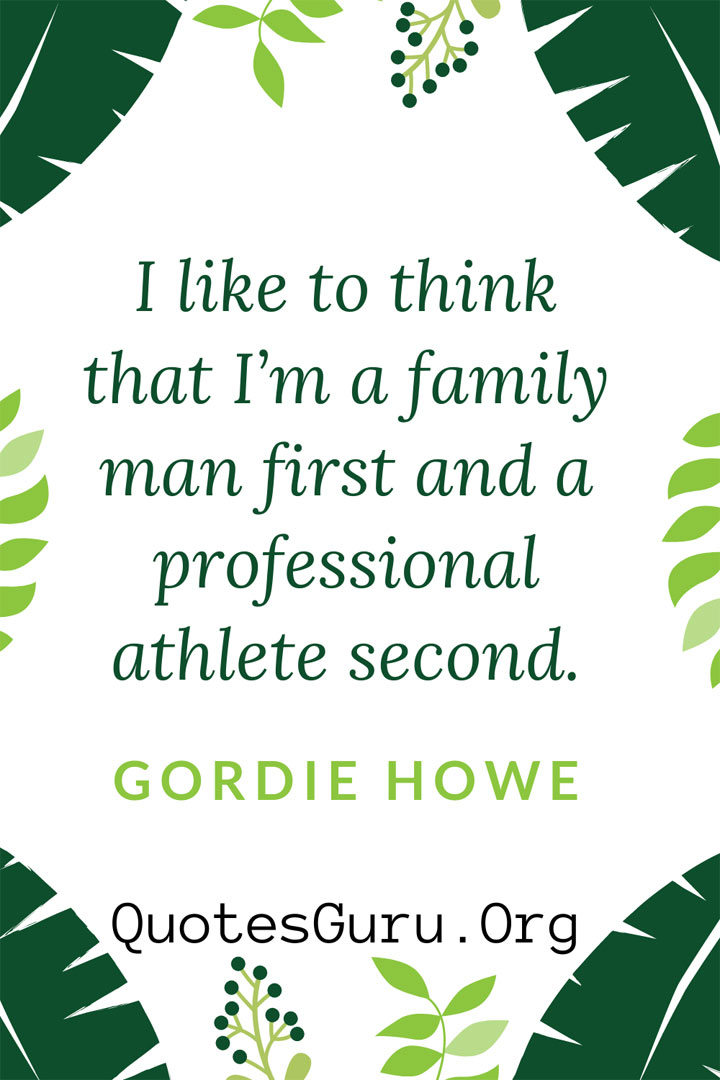 “All hockey players are bilingual. They know English and profanity.”

“If you make it anywhere in life, you owe that success to the people along the way who stuck up for you, or made sacrifices for you, and gave you a push when you needed it. In my case, those people were my family.”

“I still believe it is important that children have a chance to play other sports because they all offer learning experiences. Soccer is a growing sport and would be a good complement to hockey.”

“If I learned one thing by playing professional hockey for thirty-two years, it’s that you have to love what you do. And that’s not just true for sports.”

“American professional athletes are bilingual; they speak English and profanity.”

“You’ve got to love what you’re doing. If you love it, you can overcome any handicap or the soreness or all the aches and pains, and continue to play for a long, long time.”

“It’s not easy to retire. No one teaches you how. I found that out when I tried it the first time. I’m not a quitter.”

“I’m aware that not everyone approved of how I played, but I don’t think any apologies are in order. Early in my career, I decided that it was worth it to do whatever was necessary to earn the extra split second it takes to make a pass or shoot the puck.”

“You find that you have peace of mind and can enjoy yourself, get more sleep, and rest when you know that it was a one hundred percent effort that you gave – win or lose.”

“There’s always something in the game you wish you would have done different. That’s why players improve, because they learn from what they did before. They might have been guessing before, but now they know.”

“My philosophy is never start talking about ‘if,’ ‘and,’ ‘but’ or the past, because 90 percent of what follows will be negative.”

“Growing up during the Depression, we didn’t have much, but we had each other, we had our friends, and that was pretty much all we needed. I was aware that some people had more, but those who did, shared.”

“I helped put in a rink in Cadillac, Michigan, when my wife was very healthy. She helped them put it in and the rink is going full-bore the last time I was there.”

“My mother and dad played the fiddle and the guitar.”

“If Colleen Howe had been a hockey player, she would have been a centremen. I can see her as a centreman because you can do what you want and go wherever you want to go.”

“The first time I met Wayne Gretzky… he never said anything back.”

“You should hold the top hand on the stick like you would hold a hammer when you’re driving a nail. You have the most leverage, and you won’t get your wrist broken.”

“I would say it is important to have a good education, as hockey is a career that does not last many years, and you need to be prepared for this.”

“I wish I had more opportunities to play for Canada when I was younger, but pros just never had the chance in those days. It was just set up that way.”

“I don’t want to retire, because you stay retired for an awfully long time.”

“It doesn’t matter whether I’m in an NHL arena, at a local rink, or on a sheet of ice in the middle of a baseball stadium: when I’m around the game, I feel at home.”

“I like to think that I’m a family man first and a professional athlete second.”

“I might have some quibbles with the way the game is played today, but at its core, I know that hockey will always be hockey no matter what year the calendar reads.”

“It’s been said that, while growing up, I ate meals with my skates on. It’s true.”

“That was Dad. Don’t take any dirt from anybody.”

“Growing up, I probably raised a bit more hell than I should have.”

I hope this Gordie Howe Quotes list was helpful. Let us know if you have any quotes requirements. Till then, happy reading!