Kim Petras is one of the most popular German singer and songwriter. There are many Kim Petras Quotes available on the internet. So I have put together a collection of the top quotes to save your valuable time. 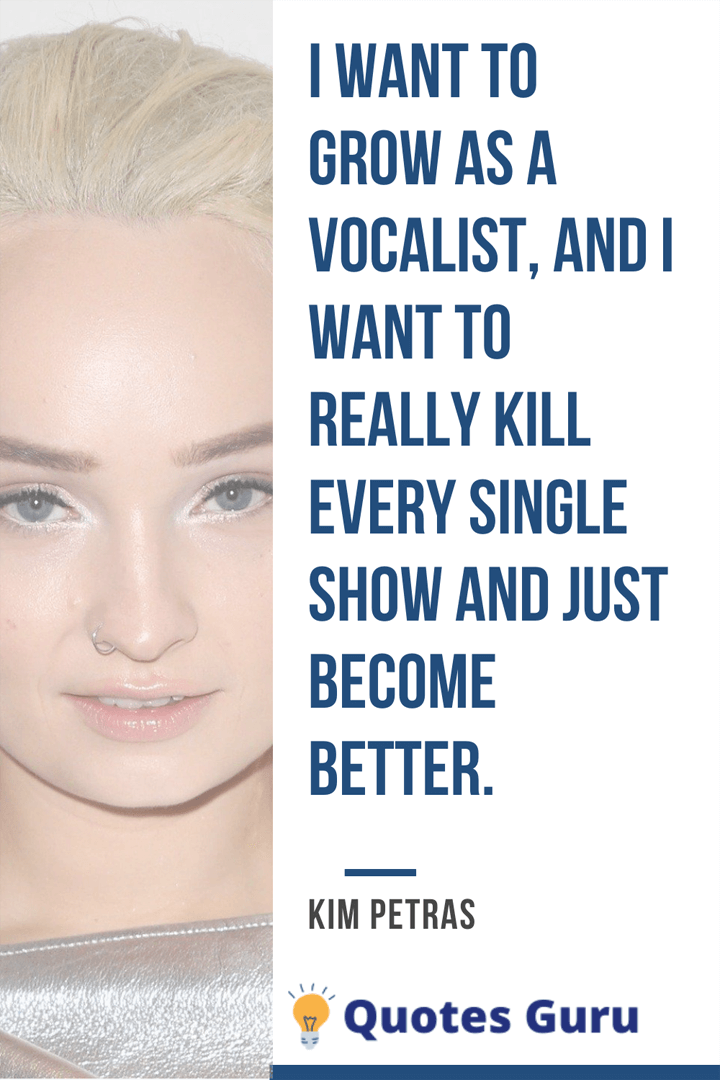 “I love Halloween, and I love spooky stuff. I love horror movies. I love everything creepy, and I’ve always kind of wanted to do this, just do really dark pop.”

“I want to grow as a vocalist, and I want to really kill every single show and just become better.”

“I’m always working with other collaborators.”

“I thought I was just going to be a songwriter for other people! And now I get to put out my own music, which is amazing.”

“As I was finding my musical style, I found my personal style as well, and moving from Germany to L.A. was part of that, raiding the secondhand stores in L.A. trying out different beauty themes, finding my love for huge lashes and big, long hair extensions.”

“Pop music means everything to me. I’ve been listening to pop since I was kid, running home from school to watch Britney Spears and Spice Girls and Christina Aguilera music videos, and it felt like it was a world to escape to for me personally.”

“I feel like I kind of earned my stripes working with The Stereotypes. It was maybe my 6th songwriting session I’ve ever been to, and they just gave me and a writer I used to write with 3-4 tracks and kinda just let us come up with whatever.”

“A lot of writing depends on being comfortable around the people you work with. I want it to feel like I’m working with friends.”

“I think an online presence is super important. I find new artists and songs I like on socials or Spotify. It’s really how people find you. I don’t take posting on socials very seriously though.”

“I definitely always took my problems and turned them into music, and the more I can make myself feel happy, the better. But yeah, I definitely feel like music was always a place for me to, like, escape to. I just love songs that are fantasy.”

“I love Bob Marley so much. Honestly, all of Madonna’s discography. She has so many amazing, fun songs. Or Cyndi Lauper. The thing is, at the same time, I also love listening to Lana Del Rey all the time, the saddest thing you can do to yourself.”

“I’m obsessed with music videos, and I just go on marathons of watching a ton of music videos.”

“I would love to work with Drake. I think he’s such a pop star, and he’s dropping amazing songs.”

“I want to become one of the songwriting greats. That’s my number one goal.”

“As a kid, I watched every Madonna documentary and tour. I was obsessed with her – and with any pop star of the ’80s.”

“I love horror movie soundtracks like ‘It Follows’ or ‘Halloween.’”

“I don’t know – a lot of people think it’s a really negative thing to do bubble gum pop, but I love it. I, like, want to own it.”

“There’s something about making a song that everybody can sing and remember, and when you listen to it the first time, you already know the words by the second chorus, like you’ve always known the song. I’m obsessed with that idea.”

“There’s a soft spot in my heart for the color and fantasy of the ’80s.”

“One day, after a big music meeting, my manager took me to Sephora and said I could get whatever I wanted, which is the dream scenario.”

“It’s a recurring thing: It’s that I fall really deeply for bad relationships. It’s just always been this way and not changing.”

“I’m just trying to make the kind of music that I’d listen to as a teenager and forget about all my problems.”

“When I hear heartbreak songs, I always feel like, ‘O.K. that’s exactly how I feel… I’m not the only person who fell in love like a stupid person.’”

“I really feel that my fans have given me a lot of confidence.”

“People started noticing my singing on YouTube, and then I came to L.A., and I lived on a studio couch. I wrote songs every single day with whoever I could write songs with.”

“I had this one producer who sent me tracks because he saw my YouTube videos that were popular and got a couple million views.”

“Growing up, I used to literally run home from school to watch the Dior and Galliano shows online.”

“Sitting one seat away from Nicki Minaj at Marc Jacobs left me speechless. I couldn’t say anything – and that’s the first time that’s ever happened to me! We locked eyes for a second, but I was too scared to talk to her. She looked incredible, of course.”

“I write my own lyrics; I can incorporate my own ideas. And yes, apparently, people think it’s cool. That’s pretty awesome.”

“I love all music. I’m not specific. I don’t just love one genre!”

“To hear my songs at parties is really amazing.”

“I think pop music, for me as a kid, I hated school and ran home to watch Britney Spears videos. I just felt like I could forget about the stuff I didn’t like about my life and listen to pop music and escape.”

“I love nostalgic pop music. The ’80s especially, to me, is the greatest era of songs. I just love the ’80s so much.”

“I get my inspiration for my songs and the lyrics from experiences in my life, but I’m also very inspired by the Beatles and Cyndi Lauper, as I really like their music.”

“I really admire Vivienne Westwood because she always done her own thing. She is eccentric but really great at the same time.”

“I sing pop music that I like and that is completely unapologetic – which is actually the term: it’s called ‘unapologetic pop.”

“People started recording my songs. Later, I was offered songwriter contracts. And then, finally, I could take the time to work on my own project. I worked hard for this all by myself.”

I hope this list of Kim Petras quotes was helpful. Let us know if you have any quotes requirements. Till then, happy reading!